We're excited to share with you the next new release from author Dianne Duvall! An Immortal Guardians Companion is a fun addition to the best-selling Immortal Guardians series featuring deleted scenes, character interviews, short stories, and more! This book releases on October 12th, 2021 in ebook and paperback formats everywhere! Find out more and grab your own copy below. Happy reading!

Your favorite character, Sheldon, here. If you’re an Immortal Guardians fan, I think you’re really going to enjoy this companion. Dianne has packed it with ninety pages of deleted scenes that feature many of the characters you’ve come to know and love plus a bonus scene from Cliff’s Descent that you won’t want to miss.

You’ll also find every character interview Dianne has ever written inside these pages. (Those of you who’ve encountered a few in the past know the ones I conduct are the best.) If you’ve never read one or you missed a few, then pick up a copy, sit back, and laugh while I interview Immortal Guardians and the loves of their lives for the network. Even Chris Reordon and Todd down at network headquarters get in on the action.

I also interview Dianne and ply her with questions I thought you’d like to ask her. Throw in a couple of short stories, what inspired the Immortal Guardians series, and a brief Who Does What Now? list, and you’re bound to enjoy it.

See you on the inside! 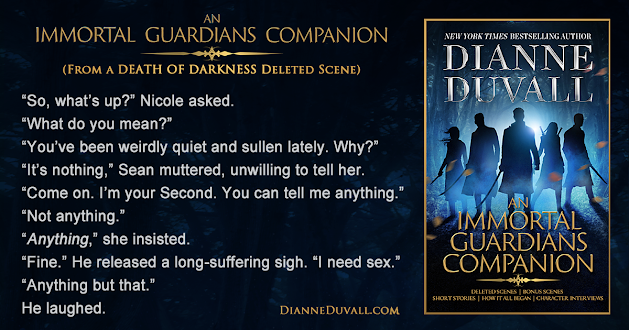 Dianne Duvall is the New York Times and USA Today Bestselling Author of the Immortal Guardians paranormal romance series, the Aldebarian Alliance sci‐fi romance series, and The Gifted Ones medieval and time‐travel romance series. The Lasaran, the first book in the Aldebarian Alliance Series, was a #1 Audible Mover & Shaker. The Segonian, the second book in the Aldebarian Alliance Series, was a Barnes&Noble Top Indie Favorite. Audible chose Awaken the Darkness as one of the Top 5 Best Paranormal Romance Audiobooks of 2018. Reviewers have called Dianne’s books “fast-paced and humorous” (Publishers Weekly), “utterly addictive” (RT Book Reviews), “extraordinary” (Long and Short Reviews), and “wonderfully imaginative” (The Romance Reviews). Dianne’s books have twice been nominated for RT Reviewers’ Choice Awards. And her audiobooks have been awarded the AudioFile Earphones Award for Excellence.

Dianne’s books have all appeared on the New York Times, USA Today, Amazon, Barnes & Noble, Apple Books, and/or Kobo Bestseller lists. The first book in Dianne’s The Gifted Ones series, A Sorceress of His Own, is a prequel of sorts to Darkness Dawns. A USA Today bestseller, A Sorceress of His Own is a medieval romance with paranormal elements that was awarded the AudioFile Earphones Award for Excellence and was an Audie Finalist. The second book in the series, Rendezvous With Yesterday, is a time travel romance that won the GraveTells Readers’ Choice Award for Best Historical Romance.

In addition to writing romance, Dianne has completed a one-act play (comedy) and teamed up with an award-winning screenwriter to write a spec script for a new situation comedy. Several of her poems have also been published in anthologies.

When she isn’t writing, Dianne is very active in the independent film industry and has even appeared on-screen, crawling out of a moonlit grave and wielding a machete like some of the psychotic vampires she creates in her books.

For the latest news on upcoming releases, contests, and more, please sign up to receive Dianne’s Newsletter or visit DianneDuvall.com. You can also find Dianne online . . .

To celebrate the release of An Immortal Guardians Companion, Dianne Duvall will be giving away a $50 Amazon Gift Card and a $25 Amazon Gift Card to one lucky reader each! To enter, fill out the Rafflecopter form found in this post. Follow along with the Blog Tour for more chances to win daily. Good luck!

Submit your books for review by Mrs. Clare

If you are an author and wish to have your book reviewed by me, please contact me at mrsclaresbooks@gmail.com. I have no genre or publishing restrictions at this time.
Thanks!

The Mark of Athena
by Rick Riordan
tagged: currently-reading

Parenting: Illustrated with Crappy Pictures
by Amber Dusick
I laughed. And I cried. And I laughed some more. I got yelled at by my boss for laughing too loud at work. And then I was crying so hard I couldn't breathe. It was fantastic.

I Just Want To Pee Alone
by Anthology

Day of Doom
by David Baldacci

Calculated in Death
by J.D. Robb

The Goddess Inheritance
by Aimee Carter